by Zachariah of Mytilene
translated with an introduction by Lena Ambjörn

INTRODUCTION
Severus was Patriarch of Antioch 512-518 AD. The biography that is presented here in English translation is attributed to Zachariah of Mytilene (Zacharias Scholasticus, or Rhetor). The biography, which focusses on the earlier days of Severus’ life and his years of study in Alexandria and Beirut, gives unique information about life in the second half of the 5th century, and is an important source for studies on Late Antiquity and the early History of Christianity. As made clear by the author in the brief introductory dialogue that precedes the main story, the main purpose of the biography is to demonstrate the virtues of the young Severus who, in spite of living and studying in a pagan context, was always, according to the author, favourably disposed towards Christianity and loyal to his Christian companions. Despite its importance, the text has not been available in English translation until now. 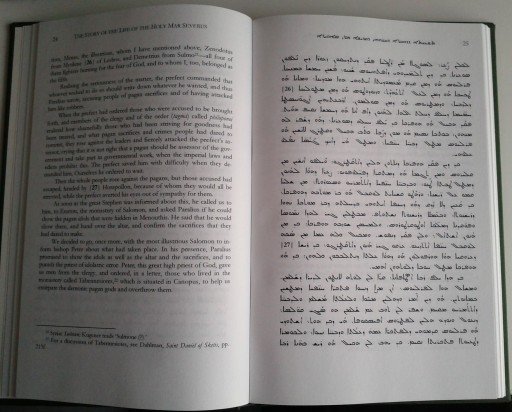 Zachariah’s Life of Severus was originally written in Greek, but no copies of the Greek text have been preserved. The text is extant only in a Syriac translation, in a single manuscript: Berlin Sachau nr 321.

This biography reveals an extreme form of Christian observance, ready to destroy any hints of paganism, and advocating an asceticism and singular devotion to God which we, today, can hardly imagine.

Having reached this far, I thought I should give a brief account of the whole way of life in the monastery which the divine Peter [the Iberian] had founded. For all their time was spent with fasting, and lying down on the ground, and standing all day and staying awake all night, so to say, and with constant prayers and services, which they used to perform meticulously, reserving only a short time of the day for manual labour by which they produced the most urgent needs for the body and for helping the poor. Even during manual labour each one of them contemplated the divine words.

They were chaste to the extent that, as it is said, they would not even look at each other’s faces, but spoke to each other while looking to the ground. And they would perform each virtuous habit in the fear of God, not uttering a single unnecessary word. I know that some of them even accepted the fetter of total silence toward all people for ten years and more from the great Peter, when he was physically alive. They spoke with God only, in prayers and service, being commanded by him who fettered them to reveal their struggle, because of the heavy burden of thoughts that was often [imposed] by the demons, to him only, so that they would get the fitting remedy for this. The rules were so [strict], that not a single unnecessary word would come from their mouths, nor would any improper thoughts be expressed in the way they looked, or walked, or glanced.

In order to prevent a bad outcome of this affair—for Leontius was held by zealous people and running a great risk—we prepared, with difficulty, the escape of salvation for him. It was not easy for us, once we had stirred them up, to discipline them, but we held back their rage—for we ought ratlier to convert 169 | the souls of these [pagans] to the fear of God, as the law of God commands by saying: “I do not want the death of the sinner, but that he is converted and lives.”

Since we wanted to burn those books of magic that had already been confiscated immediately—and tor this reason we had brought the legal representative iekiiikos) ot the city, the civil servants (demosioi) and people of the clergy, by order of the high pilests—we placed a bonfire in full view in front of the temple of the holy virgin and mother of God, Maty. While everybody was watching the magic books and the demonic signs burn, listening to what he was reading who was commitdng them to the fire, the boastfulness of what was written, the barbarous and atheistic arrogance, the demons’ evil promises and hatred of mankind, and the haughtiness of the devil who taught such bitter practices and deeds.

And I said to him: “If you want to obey me—or, rather, the divine words and the universal Doctors of the church—flee,  first  of all,  from shameful shows, from horse-racing and the theater, and from games with animals against wretched men.  Furthermore, keep your body  clean, and offer evening-prayers to God every day after having worked devotedly with the law. For we, having the knowledge, must do the evening services…”

“…while others spend a lot of time occupied with playing chess, roiling in drunkenness, drinking with whores, and making a complete disgrace of themselves.”