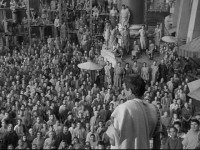 The crowd around me is getting restless. Something’s about to happen. A tall, grey-haired man with a cane struggles on to the stage. The murmurings increase.

“Who is that guy, and what’s going on?” I venture to ask a chubby, middle-aged farmer’s wife, who’s squeezing me between her basket and the colonnade.

“Are you the only one who doesn’t know our venerable Duumvir Maxillus? Where are you from then, lad?”

“Sorry. I come from behind Monte Capanne, and we don’t know much about life in town. You seem rather worried about what he’s going to say…”

“I should say so. But let’s just listen.”

Short of breath and leaning on his stave, Maxillus addresses the assembled crowd: “Honourable nobles, respected councillors, worthy citizens, faithful servants, young and old, I welcome you to this gathering here in the forum on this rather salutary occasion.

“We have much to be thankful for. But sometimes, it’s good to look back over the last tumultuous 30-40 years our motherland has been through. The older ones among you – like me – will remember, for instance, that divine portent of the sun going dark for a year…”

“Oh, yes, how well I remember that,” my surrogate Mum chips in, “We had snow in summer and all the crops failed! A portent indeed!”

“It was to warn us of bitter times ahead,” Maxillus continues, “wars and rumours of wars, times of pestilence and affliction: corn, wool, pots and weapons were all hard to come by. As you know, I was one who took arms and went out against the brutal marauding Goths, leading a centuria of local men, including many of you here. I know what it means to be critically wounded and left to die in the mud; I’ve never fully recovered, as you can see. And some of you – like me – have been called on to make the bitter sacrifice of sending their beloved sons to war and never seeing them return.

“In spite of the collective might of our imperial forces, we had to retreat and submit to the rule of the heretic barbarians for many a sorry year. I was in Rome when that glorious city suffered Totila’s yearlong siege and pillage. He would probably have murdered the entire population, if it hadn’t been for the pleas of the Holy Father Pelagius – he wasn’t yet Pope at that time – who poured out his own fortune to feed the famine-stricken people. As it was, more than half the citizens starved to death, most of the aqueducts were destroyed, and the city was left little more than a ruin.”

“I never heard of that! When was it?” I asked my burly neighbour.

“That was when our Urbanus was a lad – must have been 25 years ago or so. Long before you were even born! It was about that time that Cerbonius had to flee over here.”

“How come you don’t know our good Bishop Cerbonius? I thought he lives over at your end of the island, in a cave on Monte Capanne. Didn’t you say you were from there?”

“Well, yes. But I don’t know of anyone living in a cave. Why that? And why did he have to flee, anyway?”

“I’ll tell you later, if you’re interested. Let’s listen now to what Maxillus has to say.”

“…Eventually, as you know, the great General Narses arrived from Constantinople. And he it was who delivered us not only from the Goths, but also from the Franks and Alamanni, who had come over the Alps and encamped by the River Po, seeking their share of the plunder. After that, we enjoyed a semblance of peace, but the country had been so ravaged by the wars that return to normal life was just a dream. Here in Ilves we had not suffered quite so much destruction, but it has taken us a long time to rebuild anything like a functioning state.”

“What’s the point of this melodramatic history lesson, I wonder,” my motherly mentor murmurs, “We went through it, too. We know how it was. At least now the wars are over and we can get on with life in tranquillity. I thought he’d have something important to say.”

“He’s beckoning to that soldier guy to come up on stage,” I observe. “There’s going to be another speech, it seems.”

“I’ve reminded you all of this, dear citizens, for a very good reason. I’ve asked Centurion Didymus from Corsa to fill you in on the latest events and explain why we’ve summoned you all here today. Centurion Didymus: over to you.”

“Thank you, most honourable Maxillus, for your eloquent and informative introduction. And thank you, all you good people, for coming here today.”

“Does everyone from Corsa speak such a funny way?”

“I’m afraid, some of you will not appreciate the message I’m bringing today,” he continues. “I’ll keep it short. Three years ago, a new tribe began to invade Italy from up north, the Langobardi…”

“Not another war, surely?”

“If anything, they are more primitive and cruel than all the previous barbarian aggressors. So I’m here to recruit troops to repel those aggressors. I’m asking all able-bodied men between 16 and 35 to register at the desk over there under the colonnades. Voluntarily, at first. As successful candidates, you will be told exactly what to bring with you when you report for service at our galleys on the ides; you will be sailing to Corsa for a couple of months’ initial training, before we transfer to the mainland, initially based in Populonia.

“I’m sure you’ll consider it an honour to fight for your people and your country, but, in case I don’t have enough volunteers signing up, I have the Duumvir’s permission to conscript suitable men from this town; and I’m sure the magistrates in the outlying villages will be equally cooperative.”

“Lucky you” the matronly commentator mumbles. “Otherwise it would be: Bye, Mum. See you in a couple of years’ time, if the gods are kind! Our Urbanus never came back…”

This is an extract from Aquila, chapter 3.

3 thoughts on “History Lesson as Dialogue”