The Byzantine Monetary System in the Sixth Century

The gold solidus (4.55 g) was the basic unit of the coinage, all other coins being valued in relationship to it. The solidus weighed 1/72 of a Roman pound, or 24 carats. END_OF_DOCUMENT_TOKEN_TO_BE_REPLACED

Kili and Kwee were real eagles. Nothing to be afraid of. Not like the fearsome Aquila

, who never took his eyes off you, always looking for a chance to punish you for things you hadn’t actually done.

Silvanus had spent many an hour watching them – masters of soaring – as they hunted for dormice or frogs, or repaired one of last year’s nests in preparation for a new family. END_OF_DOCUMENT_TOKEN_TO_BE_REPLACED 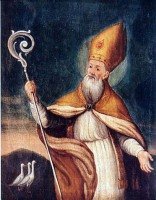 Cerbonius was a colourful character – priest, refugee, hermit, bishop, bear-tamer, animal-lover, miracle-worker and sensational papal visitor – who was later canonised by the Roman Catholic Church. He is remembered for his intimate relationship with God, “a man with a venerable life, who gave evidence of great holiness”, as St. Gregory the Great wrote in his Dialogues. END_OF_DOCUMENT_TOKEN_TO_BE_REPLACED

END_OF_DOCUMENT_TOKEN_TO_BE_REPLACED

I’ve come to a juicy episode, part of chapter 6. And the strange thing is that I feel deep emotion for the character I’m creating. The chapter introduces a runaway slave, whom Silvanus finds in the woods. Listen to the story and let me know what you think…

“Aren’t you afraid of Jupiter and Mars and all the others? Do you pray to that god of yours?”

“Well, yes, but I don’t really know much about him.” I notice tears forming in his eyes and his voice begins to tremble. “My Mother used to talk a lot about him. Before they… killed her.”
END_OF_DOCUMENT_TOKEN_TO_BE_REPLACED

In the context of a UNESCO Week of Education for Sustainable Development, a team of historians developed a remarkable 3D-animation of life in the area of Marciana Marina during the Etruscan era (6th-5th century B.C.) END_OF_DOCUMENT_TOKEN_TO_BE_REPLACED

The forecast said rain or heavy rain for each day of the week I’d planned to be in Elba for my background research. But this was my only chance and the bookings couldn’t be cancelled. In any case, Silvanus experienced bad weather – very bad weather – so why shouldn’t I? END_OF_DOCUMENT_TOKEN_TO_BE_REPLACED

At long last I’ve planned my next trip to make friends with Silvanus and Cerbonius. It means travelling not only over 700 km south but more than 1440 years back in history. It promises to be exciting.

Unfortunately, I’ll only be a week on Elba, and that will probably pass quickly. For most of the time I’ll be in Marciana, coincidentally over San Cerbone’s Day, 10th October. I wonder what I’ll learn from him…

I’ve created a glossary of unfamiliar names and terms used within these posts and in the book Aquila. It will be growing as I write more…

Hover over the following terms to discover who or what liquamen and Totila were, or visit the complete glossary.