Monday morning included a visit to the Portoferraio bookshop, followed by the library

. Quite an experience when you don’t know the language. An elderly woman assistant did her level best to hunt out a variety of books in Italian, German and English, which she thought might be of interest to me. I ended up with the details of a large, colourful tome, which turned out no longer to be available, and some photocopied pages of another book.

The bus to Marciana Alta was full of college students and German and English-speaking tourists. Among them was an interesting and knowledgeable lady, originally from Germany, but who had lived in Bremgarten, Männedorf, Venice, London, Canterbury and now Portoferraio; she spoke all those languages fluently, and thought she might be able to put me in touch with someone who could help me with background historic information. Not heard any more from her since.

I got out at Cabinovia, the cable lift up to Monte Capanne, and found my way without difficulty to the Valle dei Mulini B&B. Chiara’s smile from far made me feel welcome from the start. She has decorated the place very charmingly.

On the way I passed this sign. The 6th century hermit, Cerbonius, now known as San Cerbone, is a major player in the book, so, although it was now already mid afternoon, I set off in that direction, up a rough path overhung with chestnut trees, ilex oaks, large-coned pines and various shrubs bearing brightly coloured berries, including tree heath, sweet myrtle, mastic tree, and what I later discovered to be strawberry trees in various stages of ripeness. Amongst them all were smaller bushes, various herbs and cyclamen, as well as the ever-present, sweet-smelling macchia.

Then the clouds closed in and it began to rain. 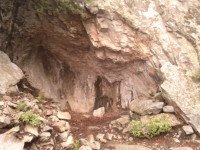 A couple of Swiss families with happily chatting kids, suitably clad in colourful oilskins, passed me and said they had been as far as the chapel under the Papagaienkäfigbahn (parrot-cage lift). So I pressed on and, after a couple of false moves, made it as far as San Cerbone’s cave. It’s hard to believe he really 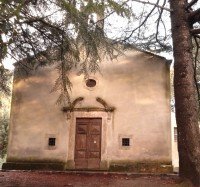 lived in such a small hovel. Then I moved on to the rather sad-looking chapel built in memory of him.

On the approach road I spied what looked like a deer, but which I was later told must have been a female mouflon, as there are no deer on Elba.

Coming down to the village, I met Renato Paolini of the Il Capepe exclusive jam shop – and had a very interesting conversation with him about Elban fruit and traditions. When I said I was interested in the history of the island, he gave me the mobile phone number of Silvestre Ferruzzi, the Director of the Marciana Alta Archeological Museum, which I very much wanted to visit. I was disappointed to hear that it closes at the end of September; Silvestre, the only one with the authority to open it outside opening hours, lives in Portoferraio.

All in all, I was very satisfied with my first day’s exploration, enjoyed a meal in the Bella Vista restaurant and returned to my room. 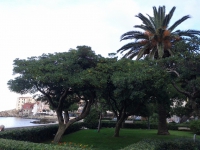